Weather forecast for Sunday 7 June 2015 was good so I posted  and ‘event’ with a number of options.  The most popular was kayaking through the shipwrecks with (fingers crossed)  some dolphins.  We met at West Beach at 9am, checked and loaded a collection of sea and estuary kayaks on the ‘Big Red Trailer’ and headed for Snowden’s Beach (next to the Port Adelaide yacht Club and Port River Sailing Club).  We did some basic skills induction on the beach and hit the water.  One paddler (who shall remain nameless) decided the water was so inviting he went for a swim.  We got him back in the boat and headed off.  We managed to avoid a tugboat (the Port River is a commercial port), crossed the river and headed up the North Arm, past the Torrens Island power station.  Lots of laughter about Australians driving on the left and paddling on the right.  We crossed the North Arm opposite some wrecks and paddled around.  One dolphin slipped through, only spotted by me.  We beached on one of the wrecks for lunch and.just as we were about to leave, two dolphins came swimming in at high speed to right next to us, and under Anna’s kayak. There was surprise about how big they were. I had the GoPro running, and got some footage, they were then spotted on the opposite side, between two wrecks.  There was much thrashing around as the dolphins were spooking, and presumably eating, fish they had herded in.  Another one came in later, but not as spectacularly.  We packed up and paddled back.  One smaller member of the party had trouble paddling the big ‘Storm’ sea kayak into rising winds and chop, and had to be towed across the river.  Hmm, I’ll feel that tonight!  Then back to the sheds for washdown and on our way.  Cooper, Tim, Laura, Anna and Jon (BaKhoa) handled the boats well, novices Tat and Priscylla had some trouble but mostly kept up. 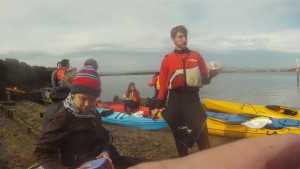 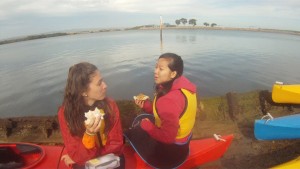 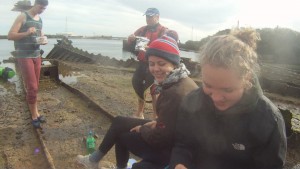